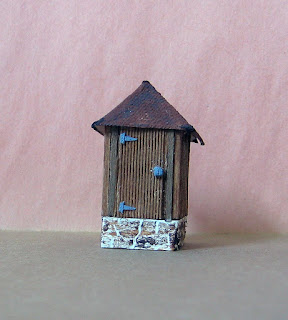 When I tired of using the traditional gabled and slanted shed roofs on my structures I did some research of other roof types. I didn’t realize just how many different types of roofs there were. Although I have come to the point where I am willing to try other types of roofs, at the time when I saw the pyramid roof, I told myself that I would have to try this roof out on my next structure. The pyramid roof is a type of hip roof and can be built either on a square or rectangular frame.

I have experimented with different methods of fabricating this roof type and the best method that I came up with was to lay out the four triangles side by side on a piece of cardstock. I layout the first triangles width out. The width is equal to the width of the structure plus a scale foot or two. This depends on how much over-hang you want. Once you ascertain the width, divide the width by two and at this point measure up to how high you want your roof.

Score each quarter and cut out the four triangles. By the way there shouldn’t be a gap between the second and third triangle. That is a “my bad”. I used masking tape to join the four triangles from the inside. I cut the tape in half widths and used a tweezer to help position the tape to the correct position.

I have experimented with different roofing methods. One method I tried was to use corrugated panels, paper corrugated panels would be perfect, however the metal Campbell roofing look great, however will will need rubber cement to attach them. I have also used industrial paper towels, those with the right pattern embossed on them. This is what I used on the structure above and is my preferred method.

Posted by Jan Ferris at 3:29 PM No comments: 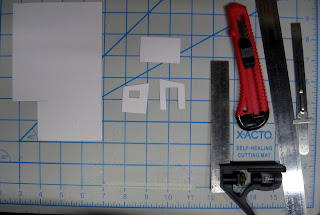 I am quite excited about starting this project. The inspiration came from an image I found in the "extras" folder on a video disk. As you can see I have cut the sub-walls for the smaller of the two shacks. This structure will "lean" against the structure on the left. This shack measures 8.5' wide by 13' long, in HO scale. The front and back will be clothed with stone embossed paper and the right hand side with hand-crafted clapboards. The clapboards measure approximately 9" wide, in 1/87 scale.

Posted by Jan Ferris at 8:48 AM No comments:

Some beautiful if not inspirational work has been created by Simon Laveuve and has been reported on Colossal. The amount of details and the splashes of color are simply magnificent!

I have been following this vlog for sometime and it has been quite an adventure where I have learned alot. Along the way I have witnessed the good, the bad and ugly.

The 6 x 6” Square of Cardstock Challenge

I initiated this project back in May of this year and probably got started in earnest in June and am just now completing my chicken coop. The idea was to create the structure totally out of one piece of cardstock that measured 6 by 6 inches. I was to use the same piece of cardstock for the sub-walls, clapboard siding, roof, floor, and door.

I did use a few strips of black construction paper for the roof and two wooded match sticks for the foundation. As a afterthought I am going to add Campbells corrugated material to the roof and weather these panels heavily.

As you can see, I weathered the structure heavily. I painted the completed structure with “Barn Wood” and then dry-brushed the “Wicker” white and then scrubbed it with white chalk. The door is scratch built and it was dry-brushed with in green, as were the windows. The windows if you remember are from some plastic kit that ended up in my box of the same. 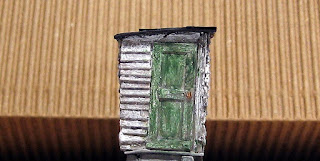 I am looking forward to starting my next structure, a goods warehouse. It will be constructed from cardstock, embossed paper, and distressed wood panels. I made a post here that explained the inspiration for its creation and a few ideas I had for its construction.

Posted by Jan Ferris at 7:31 PM No comments:

I just found these very inspiring images on Greggs Miniature Imaginations website. The structrues are created from cardstock and the contents were printed using a 3-D printer.

Posted by Jan Ferris at 5:00 AM No comments:

Drawlight was one of the two persons that Johnathan Strange encountered when he stepped out from the mirror if you remember from my previous post, he had been traveling on the King's Roads. Drawlight was there seeking spells from people for a fee, these spells were supposing being commissioned by Mr. Norrell. This of course was not a fact at all, Drawlight had found another way to defraud his acquaintances.

It is a shame that Drawlight was found out because the long list of spells that Mrs. Bullworth wanted would have been very lucrative for Drawlight.

Here is a short list of spells that the vindictive Mrs. Bullworth wanted commissioned:

Les Cinque Dragownes was a tribunal created by John Uskglass, during the middles ages to help in the regulation of English magic.

The crimes the Cinque Dragownes tried were the following:

Traveling on The King’s Roads

Johnathan Strange had used the King’s Roads to locate Drawlight and popped out of the mirror that hung above the very two-seater that Drawlight and Mrs. Bullworth had been conversing. Having concluded his interview with Drawlight, Strange walked the five miles from Hampstead to Soho-square. It was quite late when Strange arrived home. He found that he had company at the house. Along with his wife Arabella, there was Sir Walter and Colonel Grant. The later two had been contacted by Strange’s wife after Strange had been away for some time.

Strange was asked if he had indeed found the Kings Roads and he explained what he add had found:

“I do not have the words to describe it. All that Norrell and I have done is as nothing in comparison! I wish I could give you an idea of its grandeur! Or its size and complexity! Of the great stone halls that lead off in every direction! I tried at first to judge their length and number, but soon gave up. There seemed no end of them. There were canals of still water on stone embarkments. The water appeared black in the gloomy light. I saw staircases that rose up so high I could not see the top of them, and others that descended into utter darkness. Then suddenly I passed under a bridge that crossed a dark empty landscape. The bridge was so vast that I could not see the end of it. And everywhere in the halls and on the bridge, I saw his likeness.”

Posted by Jan Ferris at 6:02 PM No comments:

Why William Gibson Is a Literary Genius

A worth while aricle by Jason Guriel on the genius of William Gibson's literature. Many years ago Johnny Mnemonic was required reading for a college class and I this is how I became smitten with the Gibson's work. I went on to read his Sprawl trilogy":Neuromancer (1984), Count Zero (1986), and Mona Lisa Overdrive (1988) and I have never looked at technolgy the same since. Gibson's litature literature is fast, raw, and capivating. 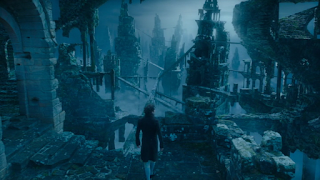 “I do not know what Strange might be capable of by now”, said Mr. Norrel. “But I was not thinking of that. I was thinking of the King’s Roads”. “I thought the King’s Roads led to Faerie?”, said Lascelles. “Yes they do. But not only Faerie. The King’s Roads lead everywhere. Heaven. Hell. The House of Parliament…They were built by magic. Every mirror, every puddle, every shadow in England is a path to those roads.”

John Uskglass and the Restoration of English Magic

“I have never heard of him,” said Childermass. Vinculus looked at him with amusement, “Off course not. You have lived your life in the Mayfair magician’s pocket. You only know what he knows. “So! Said Childermass, stung. “That is not so very trifling is it? Norrel is a clever man and Strange another. They have their faults, as other men do, but their achievements are still remarkable. Make no mistake; I am John Uskglass’s man; or would be, if he were here. But you must admit that the restoration of English magic is their work, not his.”“ Their work, scoffed Vinculus! "Theirs? Do you still not understand? They are the spell of John Uskglass’s doing. That is all they have ever been. And he is doing it now!”

Posted by Jan Ferris at 6:28 PM No comments:

Ghost in the Shell 1995 (animated version) 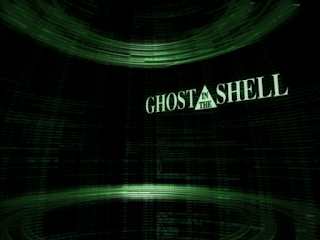 The story in the animated version 1995 of Ghost in the Shell may not have been intense as the theatrical version 2017. 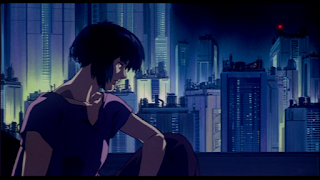 The animated version did have its highlights and more than a few philosophical questions were asked. Whether they were answered is not the point. The point is that they were asked at all.

Whereas most of the scenes in the theatrical version were dark and I don’t mean just being shot in the dark, although there were more than a few of these scenes, there was a lot wisps’ of color in the animated version. 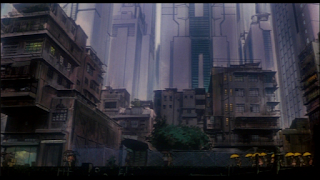 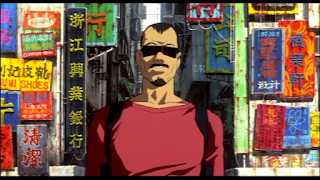 Or the Ghost in the Shell Assassin

All screenshots are from the Ghost in the Shell, 1995

Posted by Jan Ferris at 8:34 PM No comments: 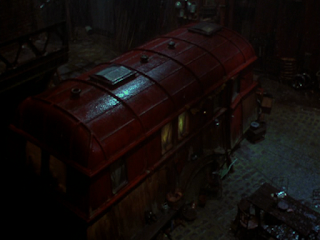 The screenshot is from The City of Lost Children

Here is another screenshot from "The City of Lost Children" and another inspirational screenshot. The trailer looks like another neat project for sometime in the future. Will I use wood or plastic? And what scale shall I build it in; HO or O gauge? I will have to make some drawings and add some diminsions. The whole scene would make a nice diorama.

Posted by Jan Ferris at 2:10 PM No comments: