“There are customarily three elements of a traditional summoning spell:

Email ThisBlogThis!Share to TwitterShare to FacebookShare to Pinterest
Labels: Jonathan Strange & Mr. Norrell, What I am reading, wizards


Miscast Terrain has released another post. This one features the how-to of creating some science fiction terrain bits. It looks easy enough and once completed very convincing. Please support this author, as he is providing the war-gamer some invaluable terrain enhancements.

Posted by Jan Ferris at 9:39 AM No comments:


Throughout the years I have created several windows and doors for my scratch building purposes. Doors usually come out fine, but when creating windows I have often had mixed results. This Youtube video makes the process look easy (although still tedious when working with smaller scales).

Chauntlucet: an ancient spell which encourages the moon to sing. The song is said to be very beautiful and can cure leprosy or madness in anyone who hears it.

Daldalus’s Rose: a complicated procedure used to preserve emotions, vices, and virtues in amber, honey, or beeswax. The Daldalus’s Rose also had a huge number of other applications: it could be used to disperse courage to oneself or to inflict cowardice on one’s enemies. It could also provoke love, lust, nobility of purpose, anger, jealously, ambition, and self-sacrifice.

Unrobed Ladies: it is not what you might expect. Unrobed Ladies are a woodland flower used in a spell to bind a fairy’s spell.

Stokesey Vitrification: used to turn objects and people into glass.”

Email ThisBlogThis!Share to TwitterShare to FacebookShare to Pinterest
Labels: fairies, Jonathan Strange & Mr. Norrell, What I am reading 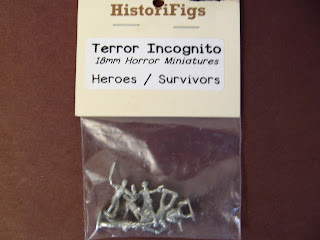 Here are six 18mm unique zombie hunters. These like the remainder of the zombies will be used to replace a set of cardboard zombies that accompanied print and play board game. They should make the game more interesting.

Posted by Jan Ferris at 8:30 AM No comments: 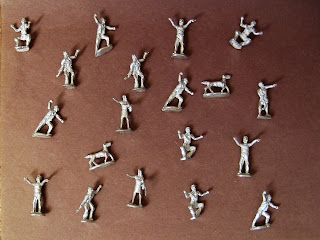 There are a few of this mix being used for a work in process, but there were 21 mixed 18mm zombies in this collection and I counted seven unique sculps within their ranks. I measured these up against a HO gauge figure and these 18mm miniatures can easily take the place of a 1/87 miniature. I never thought I would have


An excerpt from the ballad “The Raven King”

Posted by Jan Ferris at 8:28 AM No comments:

Email ThisBlogThis!Share to TwitterShare to FacebookShare to Pinterest
Labels: Jonathan Strange & Mr. Norrell, songs & poems, What I am reading

“When a young girl slipped on the ice and fell through the roof of a hot-house a young man, named Joseph Abney saved the girl by using magic. He used Martin Pale’s Restoration and Rectification1 spell to mend the broken bones and Teilo’s Hand2 to stem the flow of blood.”

1‘Restoration and Rectification is a spell which reverses the effects of a recent calamity.

2Teilo’s Hand is an ancient fairy spell which can halt the flow of all sorts of things. This spell presumably is named after the fairy who first taught a English magician how to use it.‘

Micro layouts are model train layouts that are small enough to fit into a pizza, shoe, or a match box. Most of these layouts include a circle of track and a few small buildings and some scenery, while others might run point to point. There are two sites that feature these types of layouts:

13th JAM convention report features many small and micro-sized layouts; some of these being quite whimsical.


While browsing through the authors other videos I came across a set of Mad Max customs the author was working on for a planned Mad Max game he was also working on.


I watch several of this authors restoration’s this morning and was captivated by the authors abilities restoring these for longed metal cars. This particular specimen, a Lesney, No 42 Studebaker had been played with hard and had lost quite a bit of its original paint.

“Several authorities have noted that long-lived fairies have a tendency to call any substantial period of time-‘four thousand years’. Many fairies, when asked about their ages will say they are four thousand years old; what they mean is, they do not know their actual age. Fairies are older than human civilization or possible than humankind.”

Posted by Jan Ferris at 1:00 PM No comments: 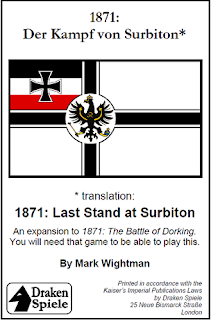 Last Stand at Surbiton is a sequel to 1871: The Battle of Dorking, formally from Draken Games. The situation is desperate for the demoralized British forces; however Surbiton, a nominally defend-able position, is their last attempt to check the Imperil German forces from sacking London.

To get you in the mood you might want to read The Invasion by William Le Queux which envisions Britain being invaded by Germany.

The Grass Cats and Dire Dogs of Planet Xurdimur

“The grass cats, big cheetah-like creatures with long slim legs built for running, were only a peril when the party left the yacht. Though fully capable of leaping aboard when the 'roller was in movement, they never did. Sometimes they might pace it for a mile or so, then they would contemptuously walk away.

Green wished he could say the same for the dire dogs. These were almost as large as the grass cats and ran in packs of from six to twelve. Sinister-looking with their gray-and-black spotted coats, pointed wolfish ears and massive jaws, they would run up to the very wheels, howling and snapping with their monstrous yellow fangs.”

Posted by Jan Ferris at 9:36 AM No comments:

Email ThisBlogThis!Share to TwitterShare to FacebookShare to Pinterest
Labels: alien, Philip Jose Farmer, SCIFI, What I am reading

Hoobers are an alien life form prevalent on the Planet Xurdimur. “Unable to go back to sleep, Green watched a herd of hoobers take to their hoofs at the approach of the Bird. These diminutive equines, beautiful with their orange bodies and black or white manes and fetlocks, sometimes formed immense herds that must have numbered in the hundreds of thousands. So thick were they that they looked like a bobbing sea of flashing heads and gleaming hoofs stretching clear to the horizon.”

Email ThisBlogThis!Share to TwitterShare to FacebookShare to Pinterest
Labels: alien, Philip Jose Farmer, SCIFI, What I am reading 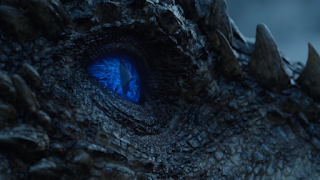 Game of Thrones season six and the episode seven

episode seven. One of Daenerys Targaryen’s dragons is shot down by a javelin throwing white-walker. The dragon crashes into a frozen lake only to be dragged out by an army of the undead. A white-walker touches the dead dragon and it becomes a undead dragon.
Posted by Jan Ferris at 9:13 PM No comments:

When Strange had successfully conjured up his first Fairy, he thought we would have his questions about magic answered. “How would I go about turning myself into a bear? Or a fox? What are the names of the three magical rivers that flow through the Kingdom of Agrace?” And although Strange asked the fairy these question the fairy would not even answer one of his questions.

Agrace is the name sometimes given to John Uskglass’s third kingdom. This kingdom was thought to lie on the far side of Hell.

Posted by Jan Ferris at 5:00 AM No comments:

Email ThisBlogThis!Share to TwitterShare to FacebookShare to Pinterest
Labels: fantasy, Jonathan Strange & Mr. Norrell, What I am reading

The Makings of a Magician

“Who was it that said a magician needs the subtlety of a Jesuit, the daring of a soldier and the wits of a thief?”

Email ThisBlogThis!Share to TwitterShare to FacebookShare to Pinterest
Labels: Jonathan Strange & Mr. Norrell, What I am reading, wizards

The Battle of Dorking 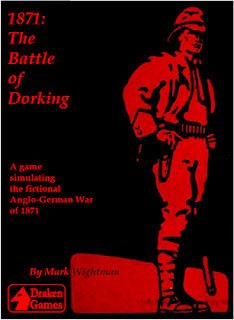 The Battle of Dorking is the first “print and play” game I purchased. The Battle of Dorking is a fictional battle between German imperial forces and a mostly vagabond lot of English citizens and soldiers in Victorian England in the year of 1871. The game features 38 pages of rules, counters, statistic tables, and a large map (two pages). There are 20 pages of rules and the remainder of the booklet includes back-end details.

Posted by Jan Ferris at 9:00 AM No comments: I found the slime creatures had been replaced with these cute aquatic creatures. I fed three sets of quarters into the machine and received two aquatics and one slime creature. Not sure how it found its way into the mix but here he is. 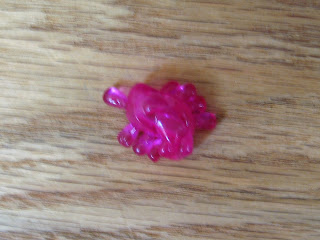 The aquatic creatures measure approximately on inch long and stand roughly a half-inch high and are made of some “rubber-like” material. They are a bit squishy to touch. 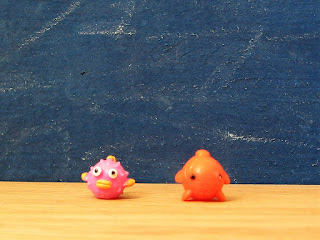