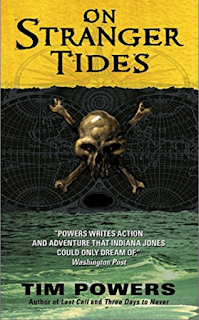 “And then all at once they were no longer alone-in fact, the clearing was crowded now with human-shaped forms that were nearly transparent to the torchlight, though the light was dimmed if a number of them overlapped in front of it, and all of these insubstantial things were crowded in toward he blood pit and crying out imploringly in tiny, chittering, birdlike voices.”

Email ThisBlogThis!Share to TwitterShare to FacebookShare to Pinterest
Labels: Disembodied Spirits, horror, On Stranger Tides, Pirates, What I am reading